TALLAHASSEE – Gov. Rick Scott announced June 14 the selection of Janet Petro to the Florida Women’s Hall of Fame. Governor Scott chose Petro and two other nominees, Adela Hernandez Gonzmart and Lee Bird Leavengood, from a group of ten nominees selected by the Florida Commission on the Status of Women. They were considered for their work to make significant improvements in life for women and all citizens of Florida.

Janet E. Petro, 58, was born in Michigan and graduated from the U.S. Military Academy at West Point, N.Y., where she received a Bachelor of Science degree in Engineering. She also received a Master of Science degree in Business Administration from Boston University. Upon graduation, she served in the U.S. Army as a commissioned officer and helicopter pilot. Petro served in various management roles throughout her career, but most notably, as Deputy Director of NASA’s John F. Kennedy Space Center. As the first female deputy in the history of the John F. Kennedy Space Center, Petro manages and executes the center’s mission. Petro spearheaded many projects and established partnerships that led to more efficient and cost saving practices at the space center. Among her many achievements, she has been honored with the Meritorious Presidential Rank Award. 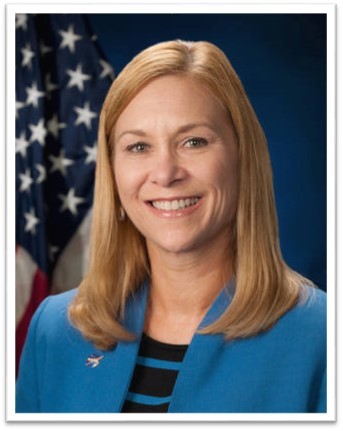