TALLAHASSEE – Gov. Rick Scott recognized George Bennett (Ben) Ritter with the Governor’s Medal of Merit during the June 14 meeting of the Florida Cabinet.  Ritter is a former non-commissioned officer in the U.S. Marine Corps and serves his community as an advocate for veterans with disabilities.

“I want to thank Ben for his service in the United States Marine Corps and commitment to advocating for veterans and citizens with disabilities,” said Governor Scott. “Ben’s dedication to improving the lives of those with disabilities is humbling.  I’m honored to present him with the Medal of Merit today for his service and positive impact on the lives of countless Floridians.”

In 1988, Ritter lost the use of his legs during an unsuccessful back operation and began working in Tampa representing veterans with disabilities in 1997.  He served as the Government Relations Director for the Florida Gulf Coast Paralyzed Veterans of America from 1997-2012 and as an American Disabilities Act consultant to the Hillsborough County Public Transportation Commission.  Ritter currently serves on the Hillsborough County Veterans Council, is co-chairman of the Tampa Mayor’s Alliance for Persons with Disabilities and is a member of the local Military Officers Association of America chapter and Hillsborough County Alliance for Citizens with Disabilities.  In 2016, he was awarded the “Edwin Porterfield Award,” which pays tribute to individuals, organizations and corporations who go above and beyond to help Tampa Bay area veterans and their families.

“Ben’s passionate advocacy on behalf of persons with disabilities is well known and respected in Florida’s veteran community,” said Glenn Sutphin, executive director of the Florida Department of Veterans’ Affairs. “His tireless efforts to help drivers with disabilities resulted in Florida’s gasoline stations displaying their phone numbers on gas pumps for pumping assistance.” 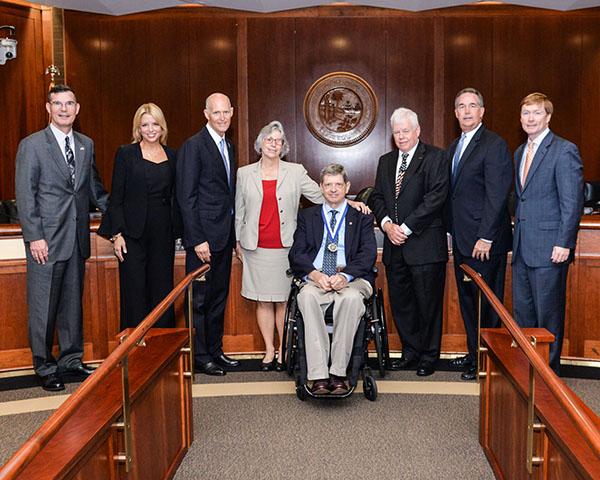